Politico reports about the threat of the Turów mine expansion

The threatened loss of drinking water for tens of thousands of people in the Czech Republic’s Liberec region has earned the notice of Politico, a Brussels-based news site. Politico reported on the plans for the expansion of the Turów brown coal mine in Poland, near the Czech/German/Polish border. https://www.politico.eu/article/poland-polish-coal-appetite-angers-its-neighbor-czech-republic-prague-germany/ 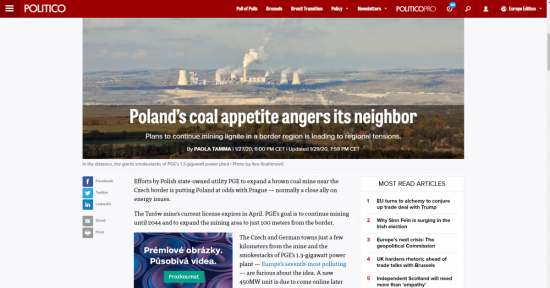 The Frank Bold team is among those helping the Liberec regional government and ten affected municipalities to fight plans for expanding this mine out to a mere 150 meters from the Czech border and down to below the level of the Baltic Sea. Signatures for a petition  against this expansion were collected from Frank Bold’s supporters until February 5th.

The European Commission's proposal must be strengthened to end corporate harm to human rights, the environment and climate

On 23 February 2022, the European Commission released its proposal for a directive on Corporate Sustainability Due...

Draft standards for EU sustainability reporting are out, with Frank Bold Experts among the contributors

European companies can now take a look at the draft sustainability reporting standards they will report against in the coming...