To support our advocacy work on concrete legislative proposals and recommendations, we collaborate with partners from the Czech Republic, Poland, and Slovakia to prepare and publish reports, case studies, data analyses, and examples of international best practices.

Project: Inviting stakeholders to the process of monitoring anti-corruption legislation and policies in Poland, Czech Republic and Slovakia

The project aimed at monitoring and evaluation of enforcement of anti-corruption policies and legislation in the Czech Republic, Poland, and Slovakia, in four thematic areas relevant to the prevention of political corruption and misuse of public funds:

As part of the project, we analyzed and identified weaknesses in the national anti-corruption legislation, its implementation, and practice in these four areas, and formulated recommendations for the three member states on the basis of our own data and findings as well as international standards and good practice:

Co-funded by the Prevention of and Fight against Crime Programme of the European Union.

The project’s long-term goal was to build the capacity of front-line national and EU level civil society organisations (watchdogs) by networking and sharing their know-how, and thereby contributing to a more coordinated and efficient fight against political corruption and misuse of public funds within the EU. Specific project objectives included:

The study compares Czech, Polish, and Slovak regulations and practice, identifying major gaps both in the national and EU legal framework that fundamentally increase the risk of political corruption and mismanagement of EU funds. The report results from a year-long research by local teams of lawyers, economists and political analysts, and “shadows” the first EU Anti-corruption report published in early 2014. Analyzing major risks of political corruption in the management of public funds, the study sheds light on why millions of euros continue to be misused and why implementation of EU funds regularly ends up in criminal prosecution in all three studied countries. It concludes that European Commission and the three studied member states were ineffective in regulating anonymous and offshore recipients of funds and allowed management and oversight of the programs to be riddled with political conflicts of interest. The report includes a number of concrete examples from all three Member States and offers a set of recommendations for both national and EU level decision-makers. Read more about the study findings.

The project was supported by a grant from the Open Society Foundations.

New analysis of the non-financial disclosures presented on international webinars

Frank Bold organised two online events to present the results of the research on the disclosures made by 300 companies on climate and environmental matters providing targeted presentation and insights for companies in Southern Europe and Central and Eastern Europe.    New data from the research shows some, yet insufficient progress at a turning point for sustainability reporting in Europe as the legislation for sustainability disclosures in Europe will be reformed in 2021 (

The "LIFE-Legal Actions - Right to Clean Air" (LIFE15 GIE/DE/795) project ended in November 2019. The Layman's Report, written for a general audience, summarizes the work and results of the project as well as its long-term environmental Benefits. The report is available here. The European Union's LIFE Programme is a funding instrument that supports environmental and climate protection Projects.

An analysis of the climate-related disclosures of 300 companies from Central, Eastern and Southern Europe pursuant to the EU Non-Financial Reporting Directive (22.98 MB)

An analysis of the sustainability reports of 1000 companies pursuant to the EU Non-Financial Reporting Directive (31.6 MB)

Non-transparent handling of ETS revenus and potential violation of ETS Directive in the Czech Republic (384.92 KB) 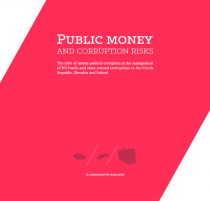